Golf Solutions for People with Disabilities

This is an article that was in every newspaper from Halifax to Prince George, BC.

By KEVIN BISSETT
The Canadian Press 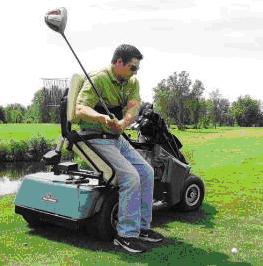 It has been 12 years since a 12-metre fall from a highway overpass left Shane Dunnett with a life-changing back injury.

Back on the course: Shane Dunnett of Fredericton uses a specialized cart for people with disabilities to golf at the Carmen Creek Golf Course in Fredericton recently.

While he has some movement in his legs, Dunnett requires a wheelchair to get around.

Since then, the 33-year-old NB Power employee in Fredericton has faced, and overcome, many barriers.

He's an avid wheelchair basketball player. He rides an all-terrain vehicle, camps, fishes and is raising a family.

But he has been forced to watch golf from the sidelines, until now.

A chance encounter with co-worker Terry Avery in the lobby of their workplace late last year has resulted in a new opportunity for people with disabilities in New Brunswick.

Avery is the owner of the Carmen Creek Golf Course - a nine-hole, executive-style course on the edge of the Saint John River.

"I saw Shane and asked him if he ever golfed," said Avery. "He said 'I can't, because I can't wheel a wheelchair across the green.' So I said there has got to be a solution."

Avery said it took them just 10 minutes of searching on the Internet to discover a golf cart called the SoloRider.

"It's designed for a single rider and it has a mechanical seat that has a waist strap and a chest strap that holds you in," said Avery. "The seat rotates ... and then will lift and hold you over the side of the cart."

That puts the golfer in an almost standing position, allowing them to use regular golf clubs.

The carts are about three-quarters of the size of a regular power cart, and have wide, smooth tires that allow them to go up onto the greens and down into sand traps without doing any damage to the course.

"I've thought about golfing a lot and have gotten out on the driving range just with my wheelchair to whack the ball around, but it's pretty tedious trying to get the angles right, and you are in the sitting position with your knees and chair in the way," said Dunnett.

"So I never really thought about being able to get out on the course with any kind of special equipment until I ran into Terry."

Soon after their initial meeting, they had put together a fundraising committee to buy two of the SoloRiders.

The course now has one of the specialized carts - the first in New Brunswick, and one of only 11 in Canada.

On July 1, Dunnett strapped himself into the cart, pulled a club from his golf bag and drove a ball down the first fairway of Carmen Creek - his first round of golf in a dozen years.

While it took him a few holes to get the knack of the cart and swinging a club again, Dunnett was soon giving his fellow players some competition.

"It was awesome to get out ... the sense of freedom and to golf with my dad and my father-in-law for the first time," he said. "It was awesome.

"I want to do another round right now," he said as he finished the round.

His father's pride in his son's accomplishment was obvious.

"Just talking about it, I get tears in my eyes," said Hubert Dunnett. "I'm just so happy that he can experience that."

The elder Dunnett said he was surprised there are so few of the carts in Canada.

"I'm not sure why each golf course doesn't have one," he said. "It's so encouraging to an individual to be able to go out and golf like anyone else."

We had our benefit social Saturday night March 28, 2009 at the MusiPlex on Cityview Avenue. A special thanks to all the MusiPlex staff and what a great place to have a party.
The funds raised will go toward the purchase of two single rider golf carts and to install Sure Grip hand controls on four regular golf carts.
Paul Campbell, Rick Hutchins and friends played earlier in the evening and sounded awesome.
Casey LeBlanc & Razberry Skye started playing around 9:30PM and they were incredible. Everyone danced up a storm.
We had both a silent auction and a live auction because we had so many great donated items.
Below is a list of volunteers and musicians who volunteered their time at the event in addition to a list of sponsors who donated auction items or purchased a large number of tickets.
We could not have had the event without all the volunteers and a special thanks to the great musicians who volunteered their time as well.
The volunteers spent their Saturday night helping raise funds to purchase equipment so people with disabilities will be able to enjoy one of our favourite summer sports.
Thank you all and your efforts are very very much appreciated.